Good morning, today’s blog post is a rather exciting twisting tale of a beautiful blue Weimaraner named Tessa. Tessa came to us from the beautiful state of Oregon and two wonderful breeders, Cliff and Shela, who has since become very good friends to me.

We met over the phone in 2008 and quickly became friends and bonded over our shared passion for our beloved Weimaraner.  In talking with Cliff, I had mentioned my search for a quality blue Weimaraner from a solid hunting background.  They had an available puppy meeting my criteria so I flew out to Oregon and stayed with them for a couple of days when I picked up Tessa.

Cliff was happy to teach me about whelping and rearing the wonderful Weimaraner, and I really enjoyed my time there.  When I returned from Oregon with Tessa, I was giddy with excitement.  I trained with her daily, got her basic obedience done, and sent her to a field trainer.  She returned from the trainer with the basic knowledge to get the birds in the field.  I registered her with AKC as Drehbar’s Breakin all the Rules because not only was she a blue Weimaraner, she also carried the longhair gene.  Not long after, I started showing with IABCA ( International All Breed Canine Assoc., Inc. ), and she became Int CH Drehbar’s Breakin all the Rules.  She was also a rock star in the field and went on many of my guided hunts.

About six months after I brought Tessa home another breeder had contacted me to tell me she was a junk dog and I should place her in a pet home and cull her from my breeding program because her hips were going to be crap and never pass OFA!  I had only been breeding four years and was still naïve and uneducated in OFA and hip health.  This breeder insisted that there was no way she would pass her hip testing because her mother had belonged to her and was dysplastic.  Well, as you can imagine, I was crushed because I had already bonded with her and knew she was going to be a dream dog!  So I decided to wait and see.  I had also met through the wonderful Weimaraner an Amazing girl named Holly – who to this day is still my Best Friend!  Holly worked at a leading reproductive Clinic in West Michigan – the owner recommended doing an OFA prelim on her at 6 months to see where I stood before investing money into her future.  Once the x-rays were taken I was immediately called to the consultation room– both the veterinarians and the techs were smiling ear to ear!  She had beautiful hips – I was so relieved.  I showed her in IABCA and I hunted with her and when she turned two we had her official OFA x-rays done and they came back Excellent!  Cliff & Shela and I were not surprised we never lost our faith.  I had also since purchased Feebie from them (Tessa’s full sister)  she also came back with Excellent hips and earned her International Title.

When Tessa had her first litter, the same breeder mentioned above, contacted all of the puppy buyers I had via Facebook to let them know the puppies would be crap because of who Tessa’s mother was.  Thankfully, I had already explained to my buyers Tessa’s unorthodox history.

Because I had led with honesty, all the puppies had great new homes!

This weekend at  11 years old Tessa went on a hunting trip with one of my executive clients who just wanted a dog to go in the field point & retrieves his birds.  He brought her back Sunday with a bag full of birds and a huge smile on his face & I honestly think Tessa was smiling too.

I’m so glad I didn’t let one person steal my dreams.  I am thankful for the people God and the wonderful Weimaraner have brought into my life.

Over the years, I learned most everyone has your best interest at heart; however, there are always a few who wish otherwise.  Some people want to see you fail and plant the seeds for your failure.   Others encourage you quietly, and some (like Holly) yell and scream words of encouragement.  Strangely enough, the very breeder who said she was worth nothing purchased a grand daughter of Tessa’s from another breeder so I don’t think she was such a bad dog after all!

I will forever be grateful for my friendship with Cliff & Shela of Owyheestar Weimaraners and thank them for trusting me with their puppies over the years!

We place all of our puppies on a contract that ensures they will come back to us in the event their owner can’t keep them.  We do this to ensure our puppies don’t end up in a shelter or a rescue.  Occasionally, the best laid plans don’t always come to fruition.

Today I received a lovely email from a couple in California who had adopted one of our beautiful silver longer puppies from a rescue.  In the email, the lady assured me up he was well loved and amazing.  She had reached out to me, to complement me on breeding such a wonderful dog. She sent many pictures and information of what is life is like in California for him.  She really wanted me to know he was never abused or unloved just the victim of his parents divorce. I appreciate that she reached out to me because I knew I had been unable to reach the owners for about a year.

Occasionally, people don’t update us on their whereabouts. In this case, the puppy had been placed in foster care and then adopted by its current family. For whatever reason the purchaser reached out to rescue instead of contacting us, we understand sometimes it’s hard to admit that you are unable to meet the needs of the puppy, and placing with rescue can be easier than admitting you can keep the puppy to the breeder. Up until this year, I thought that if rescue received one of our puppies with its paperwork identifying us is the breeder that the rescue would reach out to us to see if we were interested in taking the puppy back or caring for the puppy here until a new home was found. In these two occasions that we’ve learned about this year that wasn’t done, and the puppies were adopted and I would’ve never known. Knowing where my puppies are is really important to me each puppy born and raised here leaves here with peace in my heart.  I do care where they go, and I enjoy getting updates on them as they grow and become a part of their family. While not every new owner sends updates, we do reach out at the one year birthday to check up on the puppies. In some instances the email has changed or the phone number and we are unable to reach the owners. Because our application process so stringent we are confident we are placing puppies in a safe and loving home and have done all in our power to ensure they are safe, but life happens people move, divorce, become homeless, etc.  My hope is to build a relationship with our puppy homes that we can be a support should life throw them a curve ball.

Enjoy a photo slide show of our beautiful Maverick who traveled to California via Houston to his forever family.  Huge thanks to Lori for reaching out and sharing his story with us.  A happy ending!

Welcome to our blog! I havent blogged in a long time – I’m hoping to share information here for training and raising puppies and the general updates. Stay tuned and enjoy!

This week my mailbox and news feed on facebook has been full of reports on the outbreak of canine flu in Chicago and other areas. I have shared the articles on facebook and will add links to them in this post (All links will be at the end of this post) I have also read an article from Dog’s Naturally (shared in links) about “seeding” done my vaccine manufacturers to create more interest in vaccines as it relates to the Canine Flu, and even as a breeder with 20 years experience with dogs I am overwhelmed by the conflicting information. First and foremost we all have our pets best interest at heart, but in all reality your dog is exposed to many threats every day viral, bacterial & fungal. They are dogs they walk on the ground and contaminated surfaces all the time – they then lick their paws and ingest all sorts of things! What is a conscientious pet owner to do besides worry and wonder. FIRST: Consult with your vet about the dangers your pup faces in your area (each area of the country is unique) SECOND: take the precautions you and your vet decide are important (not everything has a vaccine but vaccines are good!) I believe if LEPTO is prevalent in your area you should vaccinate for it, I believe if you have alot of ticks you should vaccinate for Lyme – I believe if you frequent dog parks, dog daycare or dog shows the flu vaccine might be good for your dog. I am not your vet but I will tell you as a breeder I have been contacted by clients who have lost a dog to Lepto, complications from Lyme Disease, & fungal infections – these were very difficult times for the owners of these dogs. It is important to have a GREAT relationship with your vet and talk about your concerns regarding vaccines – it is important to provide the best possible immune development to your puppy through the use of Nu-vet (there is a link for information on Nu-vet supplements at the end of this article) and proper feeding and vaccine spacing. We vaccinate with the core vaccines (5-way vaccine that includes PARVO & Distemper) twice prior to puppy going home but this is in no way all the protection your pup needs. Vaccines need to be repeated or titers done to evaluate immunity. If your dog has a compromised immunity system (from disease or illness) your veterinary professional can help you with understanding the risks and benefits of the various vaccines and preventative care available. Please take the time at your next appointment to discuss your concerns with your vet they are the best source for information regarding your specific dog and location. I am so thankful for having my friends who are also veterinarians and vet techs to answer all of my questions and concerns. I will continue to share information as it becomes available.

We just wanted to share a few photos from Storm’s first two weeks in his new home. He is a sweet, smart and playful new addition to our family. He is already using the potty bells consistently and has learned to sit and give his paw on command. We are very happy with our new family member.

Hope you are staying warm! 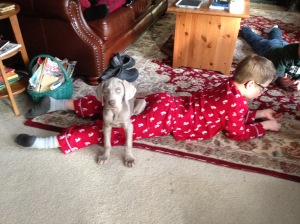 Posted on January 8, 2015 by drehbarweims

Recently we received an update from Chad on Roland he is an Ally X DUke pup from 2011 and Blitz’s brother (the sire of our current litter) We thought we would share the pics with you – enjoy!

Doni, I have attached a few pictures of Roland , he has been an awesome addition to our family, what a character.